Can you sue for involuntary commitment in Wisconsin?

You can sue for involuntary commitment in Wisconsin. The state can only involuntarily commit you or a loved one to a mental health facility if it can prove that confinement is necessary. If the state did not have legal grounds for involuntary commitment, you may be eligible for financial compensation. Warhsafksy won $500,000 dollars for false imprisonment in a psychiatric hospital case. 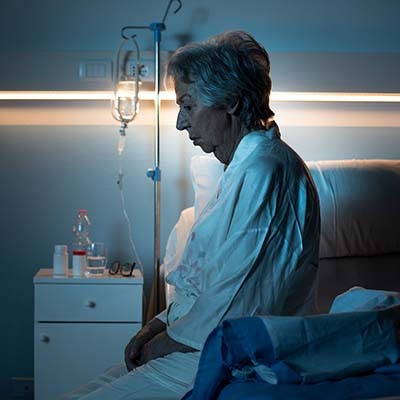 At an Overeaters Anonymous meeting in Milwaukee, a person trying to improve his health was approached by someone who claimed to be a “health spa representative”. She used a friendly approach with the young man, suggesting that his problem was deeply psychological and he needed to seek treatment. She claimed that her company would pay for his transportation to a health spa where he could reset his body and lose his extra weight. The young man agreed to pursue treatment through the representative’s company.

Later he was picked up in a limo, signed a waiver which had been impressed upon him as standard paperwork, and was promptly dropped off at a psychiatric facility, in which he was held against his will for over a year. This was not the health spa he was promised, but an asylum for the mentally infirm, and he had signed away his right to leave freely. If you or someone you know has suffered under the hands of medical malpractice, Warshafsky will fight tooth and nail on your behalf.

Thousands of people across the country were deceived in this manner in the late 80s and early 90s. This racket took advantage of the gap between health insurance companies and for-profit medical institutions like the Psychiatric Institutes of America, owned by the Hospital Corporation of America. These institutions came under fire in the 90s for bribing physicians to falsify diagnoses, charge for treatments that were never given, and even made up patients that didn’t exist, all for the purpose of billing insurance companies and pocketing the payments, driving up insurance premiums for every American. The personal injury attorneys of Warshafsky Law promised to pursue justice for these wronged individuals.

The Overeaters Anonymous grift wasn’t the only way this fraud was implemented. A mother would become concerned because she thought her teenager was using drugs or had a drug problem. They would go to their doctor and the child would fess up to using an assortment of mind-altering substances. The doctor would, instead of diagnosing the child as a drug abuser and recommend rehabilitation treatment, diagnose the child as having a psychological disorder that spawned the drug use. Insurance companies will often cover up to a million dollars in psychiatric treatment, but only up to $50,000 in drug treatment. An altered diagnosis can mean a big payoff for the for-profit medical company that owns the psychiatric treatment institution.

Mental patients are easy to take advantage of because you cannot definitively test for mental disorders, as you can for high cholesterol, for example. These institutions can easily hold people captive because of the inherent implication of mental illness: most often a person does not think they are mentally ill. They think their behavior is normal, which is why they exhibit that behavior. Therefore, it is easy to falsely imprison someone, claiming they have a mental disorder. Even if a person is completely sane, they are not able to defend themselves because the defense is the same for the sane and insane alike: “I’m not crazy, I don’t need to be here.” In this way, thousands of people were falsely imprisoned in psychiatric institutions, making millions of dollars for a few corrupt individuals that seized upon the weaknesses in an unregulated, for-profit medical system.

Warshafsky Law Firm represented fifteen people in a case of fraud and false imprisonment against the owners of three psychiatric hospitals located in Wisconsin. These hospitals, located in Milwaukee, Green Bay and Prescott, engaged in this fraudulent campaign in the late 80s and early 90s to fill empty hospital beds and extract insurance benefits from patients who did not need to be hospitalized. These unnecessary hospitalizations caused serious emotional trauma to these fraud victims. The medical malpractice attorneys of Warshafsky helped them to win over $500,000, worth almost $900,000 in today’s value.

This case is another example of a Society Changing Judgement won by Warshafsky Law. The people who created this billion-dollar con game hurt thousands of individuals across America, and cost American taxpayers millions of dollars in elevated premiums due to insurance fraud, pocketing those millions of dollars for personal gain.

Take advantage of a free consultation with Warshafsky Law today

No win, no fee. You don’t pay a penny until you receive compensation. If you have been injured due to the carelessness or negligence of others, whether medical personnel or others, we encourage you to set up a free, no-obligation consultation with our Milwaukee personal injury attorneys. We can advise as to whether you have legal grounds to sue for emotional distress, how much you might reasonably expect to get in compensation, and how the entire process works.

Assuming you have a strong case and agree to let us represent you, we will ask for no payment from you until your case has been resolved and you have received compensation. Additionally, our No Win, No Fee policy ensures that if we do not prevail in securing financial compensation for your injuries, you will not owe us a thing.

Hear from our Milwaukee clients

​Krista LaFave and Victor Harding made a recovery for almost nine times more than is allowed by law!​ My husband was killed in an auto accident because a municipality failed to erect warning signs alerting drivers of a road closure ahead. Early on, I was told that a municipality is protected by a $50,000 cap and that was the most that could be recovered for his wrongful death. A statutory $50,000 cap enacted 35 years ago is meaningless in today’s dollars. It provides no accountability or consequences for a municipality’s gross negligence. ​Krista and Victor discovered a statute that rendered the $50,000 cap inapplicable in certain situations. The statute written 60 years ago had never before been tested. Through their perseverance in applying this law, I was able to recover far more than the cap. I can only pray that this result causes the municipality to change its ways.​You can’t find better representation out there than can be provided by Warshafsky.

It is important to file your claim soon

In Wisconsin, there is a statute of limitations for filing a personal injury lawsuit. This means unless you file a legal claim for your injury quickly, your case will not be heard by a court and you will have no recourse for the damages you have incurred. While it is true cases can sometimes drag on for years, this does not mean that after the hourglass is empty, they somehow expire and are taken off the docket. The sooner you contact Warshafsky’s advocates, the sooner we can evaluate and prepare your case.

Consult a lawyer if you have been wrongfully injured, even if it seems like your insurance company is working on your behalf. Insurance companies will try to delay their way out of liability; one of the “3 Ds” of how insurance companies get rich by screwing you out of payment: Deny, Delay, Defend. Don’t let your compensation pass you by.

What is an involuntary psychiatric hold called?

An involuntary psychiatric hold occurs when an individual is placed under psychiatric care without consent as a result of debilitating mental illness. Nearly every state, including Wisconsin, requires a 72-hour holding period in a mental health facility for professional evaluation. The criteria for placing a person under involuntary psychiatric hold include that the individual: - is a danger to themselves or others - suffers from a grave disability as a result of mental illness

Can I sue for involuntary commitment in Wisconsin?

How do you prove false imprisonment in Wisconsin?

When is an involuntary psychiatric hold legal?

An involuntary psychiatric hold is legal when an individual is: - A danger to self or others as evidenced by recent acts or threats - Probable to have physical impairment or injury to self as evidenced by recent acts - Unable to satisfy basic needs for nourishment, medical care, shelter or safety and the substantial probability of imminent death or injury exists - Likely to suffer severe mental, emotional or physical harm, resulting in the loss of ability to function in a community or loss of cognitive control over thoughts or actions if left untreated

I’m attorney Victor Harding of Warshafsky. If your injured the Warshafsky Personal Injury Firm will make the defendants pay your damages and compensate your loss for the rest of your life. Some very well known advertising lawyers are afraid to go to trial. They can hire actors or hang out with football players and put on a brave face. But the insurance companies know when they have a patsy. Make no mistake who your attorney is can have a greater impact on the result of your personal injury case than even the facts of your case. I vow Warshafsky will prepare to win your case at trial from the moment we take the case. Warshafsky will see to it that your interests are protected now and for the rest of your life. I measure Warshafsky’s accomplishments in the hundreds of successful outcomes and judgments that were so punitive to wrong doers. Whole industries have changed the way they do business.